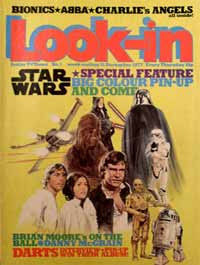 It’s been quiet at Episode Nothing, but I have been laying plans for some in-depth blog content which I hope you’re going to like.

Until I get going with that, here are some memories of a youth culture magazine that first generation British Star Wars fans are sure to remember fondly.

For British youngsters of the 1970s, one weekly magazine was the essential guide to popular culture. It was called Look-In.

Look-In was subtitled the ‘Junior TV Times’. But unlike its adult stablemate, it was a lot more than a television listings magazine. Look-In ran features, comic strips and competitions, and it had a wider remit than just television. It featured films, sport, pop music and leisure interests like skateboarding. And in the 1970s, its covers were not photographs, but distinctive paintings by Arnaldo Putzu.

Look-In had a pretty unerring nose for the things that might interest young people. From The Tomorrow People to The Bionic Woman, from Paper Lace to Abba, it was the guide to everything that was in vogue.

So it was natural that Look-In would be mad keen to run articles about Star Wars. When the film was ready to open in London in December 1977, it was on the magazine cover. And over the coming weeks and months, the film and its cast would feature again and again.

One simple but tremendously appealing feature in Look-In was its full-page pictures, which could easily be cut out and put on a wall. Obviously, this left your magazine full of holes, so you were destined to regret it when eBay was invented, but it was a cheap and easy way of amassing a poster collection.

Plenty of these mini-posters were devoted to the cast of Star Wars. Here’s one of Mark Hamill as Luke Skywalker. Visit again and I’ll reproduce some more soon – pin holes and all.
at 16:53

"Why wasn't I notified?"

This was short and sweet, but that's good too! I especially enjoyed your quip about eBay. I never got Look-In, though I really wanted to. I got 2 comics per week and that was it. It was hard sometimes when there was so much on offer and you had to choose. Most of my Star Wars Weekly comics are in bits because I tore out posters and pin-ups from those and put them on my wall. What happened to those bits and pieces, I don't know, only that they were eventually replaced with heavy rock posters.

I can smell the late 70s reading that. I love the UK-centric stuff. Can you not cover Empire and Jedi or would that be horribly off-topic?

I agree, Dec. The more personal and near to Darren's home it is - the more I love it.

I wasn't a regular Look-In buyer but I got it whenever Star Wars was in it.

I've bought a few old issues and it's surreal seeing the things they did comic adaptations of. Dempsey And Makepeace, Mind Your Language. They stopped short of doing an Albion Market strip.

Thanks very much, Dec and John. Really glad you liked it, and it's useful to have some feedback on what kind of posts people like best. As for doing Empire and Jedi, that's interesting. The Episode Nothing title and brief were pretty much about trying to discuss Star Wars as a film of 1977 rather than the start of a franchise, but of course Empire and Jedi were also huge events in the lives of first generation fans. I'll give that some more thought. One thing I almost certainly will cover is the hints and discussions about sequels that were around at the time.