Luke Skywalker and his father figures: What Star Wars has to say about dads 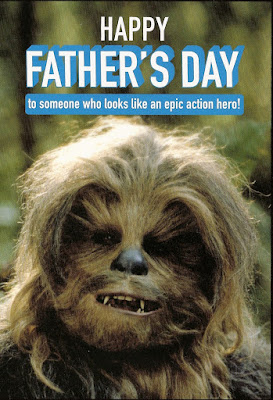 The pictures above are the Father’s Day cards I received from my two sons last weekend. There are no festivals that Star Wars does not reach.

They set me thinking about the role of fatherhood in Star Wars. Released at a time of sharply rising marital break-up, the 1977 film was the tale of a fatherless young man looking to find his place in the universe. Today, Episode Nothing considers how Star Wars dealt with the subject of fatherhood.

Star Wars and fatherhood: how the movie reflected changing times

Against this backdrop, Star Wars was released, telling the story of Luke Skywalker, a young man who seems to know little or nothing about his biological parents. We’re not told whether he ever knew his mother, but we know he is curious about his father – and that he has been told very little about him.

At this point, it’s important to forget everything we learned about Luke’s parentage from subsequent films. In 1977, we didn’t know that Luke’s father was Darth Vader. It may be that the reason we didn’t know about that is that George Lucas hadn’t thought of it yet. In the first film, the key thing we know is that there is a gap in Luke’s life caused by the absence of a father. And the story sees Luke attach himself to a series of older males – father figures or big brother figures – whose examples offer different possible futures.

Adoptive parents get a rough ride in fiction. In the real world, adopting a child is one of the most valuable things anyone could ever do. But in stories from Cinderella to Harry Potter, adoptive parents are presented as, at best, dull and at worst, downright evil. The only key exception I can think of is the Superman story, where the infant Superman is given a grounding in life thanks to the small town kindliness of Pa Kent.

In Star Wars, Luke’s adoptive father figure Uncle Owen is not exactly evil, as far as we can tell, but certainly irritable, mean and above all afraid. We know little about his background, but we know he relies on Luke’s work to keep his moisture farm running, and that he has repeatedly delayed Luke’s plans to go to “the academy”. (In the completed film, it’s not clear that this means leaving the planet and training to work on a starship crew, as Luke’s friend Biggs has done.)

We also get the idea that Owen is keeping Luke at home for other reasons than to help with the farm. He has lied to Luke, telling him his father was “just a navigator on a spice freighter”, rather than the Jedi knight we subsequently learn about. Aunt Beru seems to admire the senior Skywalker, saying Luke is not a farmer because “he’s got too much of his father in him”, but Owen, of course, lets on “That’s what I’m afraid of”.

I feel bad that adoptive parents in fiction so often turn out to be self-serving and deceitful. But Owen is at least redeemed by the implication that he is hiding something for, as he sees it, Luke’s own good. And I think stories like this appeal to a feeling that many children experience at some point – the idea that they are not really related to the imperfect people they live among, and that instead a great destiny lies somewhere else.

Perhaps he shouldn’t count, as his story didn’t make it into the finished film, but it’s worth noting that Lucas wrote an alternative role model for Luke into the early part of the film.

Biggs – the debonair, moustache-sporting, cape-wearing hero who we discussed here – is apparently slightly older than Luke, so he’s a big brother figure more than a father figure. But he does present Luke with an example of manhood – confident, worldly and making his way in the universe, away from the planet which Luke’s uncle is preventing him from leaving.

The audience is unclear how much Luke knows about his biological father, but we’re aware he is still trying to find out more. Luke initially scoffs at Obi-Wan Kenobi’s suggestion that his father fought in the mysterious Clone Wars, insisting that he was instead a navigator. But he quickly accepts Obi-Wan’s version of events: that Skywalker Senior was a Jedi knight, “the best star pilot in the galaxy”, a “cunning warrior” and a “good friend” – and that he was murdered by a young Jedi named Darth Vader.

At this point, Luke acts as though his destiny has been spelled out. He’s still conflicted, feeling he must return to his aunt and uncle, but after their deaths he wants “to learn the ways of the Force and become a Jedi like my father”. For Luke, his parentage reveals his destiny.

Ben/Obi-Wan Kenobi fairly quickly comes to be the nearest thing to a father that Luke can have. While his biological father may be dead, Kenobi is the father’s friend, has the same skills and knowledge, and guides Luke in the way we assume the father would have.

This relationship really is at the core of the film: Kenobi initially protects Luke, saving him from the sand people and from the brawl in the Mos Eisley cantina. Then he instructs Luke, teaching him about the Force and how to use a lightsaber. Finally, when they part on the Death Star so that Kenobi can turn off the tractor beam, the old man leaves Luke to fend for himself. It’s as though those three vital stages of parenting have all taken place in the short period they have known each other. His death is devastating to Luke, but also necessary before Luke can achieve his full potential – destroying the Death Star with Kenobi’s advice literally echoing in his head.

Han Solo is another character more akin to an older brother than a father, but he is another, different role model for Luke. Luke enjoys adventuring with him and even respects his opinion (for example, when he asks for Han's views on the Force).

Solo’s values seem to be almost the opposite of Kenobi’s: he’s like the friend who doesn’t meet with parental approval. Luke wants to maintain his attachment to both men, and he’s clearly hurt when Solo initially flies off with his reward rather than join Luke in facing the Death Star. When Solo changes his mind and flies to Luke’s aid, it’s clear Luke has somehow held together his mismatched ‘family’: rebellious Han and wise Ben can both be part of his life, even if Kenobi’s is the example he must follow.

Did George Lucas consciously think about how society was changing in the 1970s, and channel this – or his own feelings about fatherhood – into his script?

Perhaps not, but in drawing from many other tales and myths, he tapped into a host of stories concerned with fatherhood. By presenting some of the ideas in those stories in a fresh and vivid way, he created a tale that was both timeless and profoundly appropriate for its times.
at 09:57