The story of a boy, a girl and a universe: the original Star Wars teaser trailer from 1976

Almost forty years after cinema audiences saw the first trailer for Star Wars, Episode Nothing considers what people would have made of this strange new movie.

In the run-up to Christmas1976, the first teaser trailers appeared for a science fiction film from George Lucas, “the man who brought you American Graffiti”. It may have looked a little rough and and the music was odd – but cinema goers may have sensed that they were soon to see a kind of film they had never encountered before.

The release of the teaser was quite a big deal for those still hard at work on Star Wars – and for the board of 20th Century-Fox, who were keen to see whether the studio would get it’s $10 million back.

This article at StarWars.com says the content of the trailer was discussed at a brief meeting on November 26, 1976, involving Star Wars’ publicity and merchandising supremo Charles Lippincott, George Lucas, producer Gary Kurtz, assistant optical editor Bruce Green and three advertising people to discuss. A rough cut was produced in just three days, after which another meeting discussed what changes were needed and what music should be used.

Bruce Green then spent three weeks preparing the trailer, travelling between Industrial Light and Magic and Modern Film Effects, the company which produced the optical effects, most notably the exploding title that ends the trailer.


According to JW Rinzler’s book The Making of Star Wars, the 107-second trailer cost $3,915, of which $1,268 was on optical effects. The music is said to be a slowed-down variation of the Winter movement of Vivaldi’s Four Seasons, while the exploding Star Wars title which ends the trailer was created by Joe Viskocil and Bruce Logan. The narrator was Malachi Throne.

We should remember that Star Wars was very far from finished when it came out. Industrial Light and Magic was ere still hard at work on the visual effects as of December 1976, while John Williams was not very far into writing the score. Very few people had seen any kind of assembly of the film. Even the famously disastrous screening for Lucas’s friends was still months in the future.


What was the reaction to the Star Wars teaser?

It seems the trailer was a morale-booster for the Star Wars crew but not entirely successful with audiences.

Lucas himself approved the trailer in early December, after which it went to 20th Century-Fox for approval. Rinzler records that Fox's board of directors were not fond of it, but that they approved it regardless. One board member was still insistent that the title Star Wars was no good, but nobody could come up with an improvement.

Yet Garry Jenkins, in his book Empire Building, says the release of the trailer was a “turning point” for the exhausted crews of ILM. Its effects teams hadn’t seen much of the film and had been nonplussed by what live action footage they had watched they had watched – until they viewed the trailer.

“Huge cheers greeted the end of the footage,” Jenkins writes. “The knowledge that they were not working on a white elephant revived the demoralised staff.” Model builder Lorne Peterson said: “Whenever somebody got really depressed, we’d run the trailer to cheer them up.”

But the reaction with audiences seems to have been mixed. Jenkins quotes Lucas as being heartened by the reaction, saying : “They were crazy to see the movie six months before it came out.”

Other audiences, it seemed, groaned or laughed. Fox executive Alan Ladd Jr, the man who had put his neck out for the film, says in Rinzler’s book that he saw it poorly received at the Avco in Westwood, California, and in Tucson.

Jenkins says Ladd finally pulled the trailer from screens after Gene Wilder saw it in Westwood and rang him. “Laddie, they’re laughing at your picture,” he said.

But the shot that provoked the laughter was R2 falling over in the desert canyon, which is surely one of the funniest moments in the film. Without realising it, Wilder may have observed the film having just the intended effect.


A billion years in the making: Looking back at the Star Wars teaser trailer

The 1976 teaser was a trailer for an unfinished movie – and it’s fascinating to see some moments that are slightly different from the final film.

In the shots from the cantina sequence, we hear the voice of Ted Burnett, playing the bartender, call “No blasters, no blasters!” in his gruff London accent. In the finished film, the voice was American. 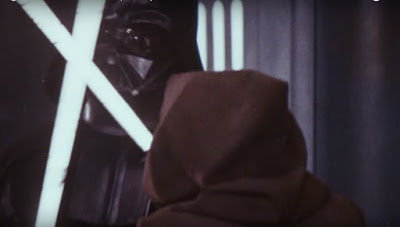 When Luke disappears into the water of the trash compactor, Han says “Kid!” much more distinctly than he does in the final mix. And when Obi-Wan and Darth Vader duel, there is no colour to their lightsabers.

But how does it work as a teaser for a film we’ve all seen many times?

Well, many people have observed that it misses the spirit of the movie. Seeing footage from Star Wars without John Williams music seems odd to us. The trailer uses cold, ominous music and combines it with some of the scarier images from the film – the Rebel being throttled by Darth Vader, the appearance of the torture robot, the marauding Tusken raider, an angry Wookiee roar that isn’t in the finished film. The mood seems unlike the fun, escapist movie we all love. But you can see how it would have made audiences want to go to the film.

Today, when trailers can be endlessly replayed online, fans can pore over every shot. In 1976, of course, that was impossible. Yet in under two minutes, the 1976 Star Wars trailer gives us (if I’ve counted correctly) 54 shots from the movie. And all of them are like nothing anyone would have seen on the screen before.

There are only a few visual effects. One is of the droids’ escape pod, which was one of the first shots finished by ILM, while the others are all from the battle with the Death Star’s sentry ships.

The other shots are a succession of disjointed, but very striking, moments. Faceless soldiers in white armour. A villain in a black mask and cloak. A frightening robot wielding a syringe. Robots with letters and numbers for names. A hero being pulled by a mysterious alien into filthy water. Characters fighting with laser swords. A boy and a girl swinging by rope across a vertiginous drop. Soldiers on a space station running about as a klaxon sounds.

If there’s a word to sum up these images, I would say it’s exotic. And exoticism was a key part of Star Wars’ appeal. It gave us, as the narration says, “aliens from a thousand worlds” (more or less). That narration may be a bit corny, but the film does live up to its promise of “an adventure unlike anything on your planet”.
at 15:44

I saw the teaser trailer while seeing For the Love of Benji with my mother. We were sitting in one of the front rows. She turned to me and asked "Would you like to go see that?" In my ten year old wisdom I said "Naw, that looks STUPID!" Six months later I was completely obsessed.

I believe the wookie roar is in the movie, when they get out of the trash compactor and Chewie hears the monster inside it. Chewie roars and runs away from it. Han then shoots it, and Leia gets pissed! I think all the shots in the trailer are actually in the movie, just the sound mix and the iconic music is missing, along with the visual effect details you mentioned (no color in the lightsaber).

Chris: That's a great story. Thanks for sharing. Sounds a bit like me, seeing clips from Star Wars on TV and declaring that it was going to be nowhere as good as Planet of the Apes.

Old Ben: Thanks for that. I'll have to check out the trash compactor scene and compare. I think I was taking the word of starwars.com, which says the roar isn't in the film and is thought to be an alternate take.
It's striking how familiar footage can have such a different atmosphere with a slightly different sound mix and different music.

I appreciate the comments. Do keep them coming.

Correct me if I'm wrong but the shot of Vader and Obi-Wan's lightsaber fight is slightly longer in the trailer than in the final movie.

wonder why they didn't go with the story of a boy, a girl and a galaxy as opposed to universe? has a better ring to it.

I worked as an usher at the Avco Theater in the summer of 77 when Star Wars came out.
I now write trailers for a living and I have to say, this is still one of my favorite trailers of all time.
It is a transition, where the trailer copy is more evocative, then it is expository.
Considering how rough the footage was, I remember seeing the trailer at a Star Trek convention in 1976
that Lippincott had brought to show, along with some slides and the audience went ballistic.

Thanks for the story.

Thanks for commenting, Gregg. Great to have the recollections of someone who saw the trailer at a convention and at the Avco. Do you remember it going down poorly at the Avco, as Alan Ladd Jr suggested?

It's always fascinating to see a glimpse of Star Wars before it became, well, Star Wars. The original trailer lets you see it through the eyes of the average 1970s moviegoer a bit, driving home the point that Star Wars at one time was a really strange film. Thanks for the article!

Great article. I saw this in Bournemouth in 77 maybe? I would have been 6. I remember turning to my Mum and saying "I HAVE to see that".