Star Wars debuts part 2: The first work of the people behind the film


Last time, I looked back at the earliest work of some of the older people behind Star Wars. We found that the earliest film to share personnel with George Lucas's film was probably Rookery Nook, the 1930 British movie which had Gilbert Taylor as assistant cameraman.

James Earl Jones had almost a decade of stage experience, mostly in small parts, when he made his film debut as a B-52 bombardier, at the age of 33, in Stanley Kubrick's Cold War satire Dr Strangelove (1964). He would enjoy acclaim on stage and make a couple more films before, at the age of  46, spending two days in March 1977 lending his voice to Darth Vader.

Kenny Baker's career in show business started when a woman stopped him on the street and invited him to join a theatrical company of dwarves and midgets. He was involved in circuses, ice shows and cabarets, and in 1960 he had an uncredited role as a circus entertainer in the British shocker Circus of Horrors, starring Anton Diffring. He was 25 when it was released.

Baker wouldn't make a second film until 16 years later, when he landed his part inside the metal body of R2-D2 in Star Wars.

Dead Heat on a Merry-Go-Round is an almost forgotten crime film, which is probably most often Googled because of the young actor who appears for a few seconds. It was the screen debut of Harrison Ford, as a bellhop delivering a telegram, who exchanges a few words with James Coburn.

Ford was 24 when the film came out, and his debut was not an auspicious one. Depending on which version of the story you read, a studio executive told him “Kid, you have no future in this business” or “You ain’t got it, kid – now get out of here.” He would soldier on for a while in supporting roles –including in George Lucas's  American Graffiti – before almost quitting acting for carpentry. He was 33 when he landed the role of Han Solo. 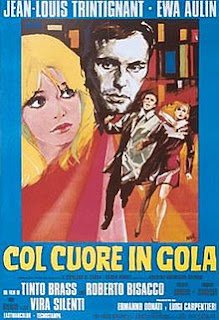 Dave Prowse was a body-builder and weightlifter looking for breaks in the movie business when he made an uncredited appearance in this Italian thriller, which also goes by the titles Deadly Sweet and I Am What I Am. He was 32 when it reached cinemas, by which time he was nine years away from his fateful casting in Star Wars.

Also in 1967, Prowse figured in a much better-known film, the Bond spoof Casino Royale, and his astonishing career would encompass several franchises with large and loyal fandoms: Bond, Hammer horror films, Doctor Who and The Hitchhiker's Guide to the Galaxy, not to mention Stanley Kubrick's A Clockwork Orange.


George Lucas made some ambitious, often avant-garde student films in the 1960s, and also observed two Hollywood productions close up: He won the chance to make a film, called 6-18-67, about the production of the western Mackenna's Gold (1969) and was an uncredited production assistant as he observed his future mentor Francis Ford Coppola directing the musical Finian's Rainbow (1967).

But Lucas's first credited work on a professional movie was as a camera operator on Gimme Shelter (1970), the documentary about the Rolling Stones concert at Altamont, during which a man was fatally stabbed.

Despite his inclusion on the credit roll, it is said that 24-year-old Lucas's camera jammed during the performance and none of his footage was used in the movie.

While Gimme Shelter represented his first on-screen credit, by the time Lucas filmed that concert in December 1969, he had already finished shooting his first movie as director and co-writer. That was THX 1138, an expansion of an award-winning student film. It would not see a release until 1971.

Carrie Fisher came from showbiz stock, had appeared in cabaret with her mother Debbie Reynolds and had made her Broadway debut in 1973 in her mother's show Irene. But she shot her film debut when she was 18, playing a young woman who propositions Warren Beatty in the political satire Shampoo. Reynolds was reportedly shocked to hear her daughter use the F-word in her first film part.

Peter Mayhew (Chewbacca). Sinbad and the Eye of the Tiger, 1977.


Hospital porter Peter Mayhew got his break in the movie business thanks to his large shoe size.

The producers of the Ray Harryhausen fantasy Sinbad and the Eye of the Tiger spotted him in a newspaper article about people with big feet and called him in to discuss playing the Minotaur. That, in turn, led to him coming to the attention of George Lucas.

Mayhew was 33 when uncredited role in Sinbad reached the screen. By that time, Star Wars was already in the US. But in his native UK, Harryhausen's film helped pass the agonising months when genre fans were waiting for Star Wars to finally cross the Atlantic.

Mark Hamill had been a busy TV actor since 1970, appearing in episodes of The Bill Cosby Show, The Partridge Family, Cannon and Night Gallery, as well as a longer stint in the soap General Hospital and lending his voice to the 1973 animated series Jeannie. His first role in a feature-length screen production was the TV movie Sarah T. - Portrait of a Teenage Alcoholic in 1975. But if we're counting theatrically-released films, his debt did not come until he provided the voice of Sean in Ralph Bakshi's animated fantasy Wizards, released just three months before Star Wars, when Hamill was 25.

And finally... He had appeared on stage and radio but Anthony Daniels was the only member of the Star Wars was to have never made a movie before. He was 30 years old when he put on the C-3PO costume.
at 14:39