The Star Wars Record Collection #2: The disco single Star Wars Theme/Cantina Band and the LP Star Wars and Other Galactic Funk by Meco

Among the hundreds who stood in line to see Star Wars in New York on Wednesday May 25 1977 was a 37-year-old trombone player and record producer named Meco Monardo.

He loved the film so much that he went back another four times on the Thursday. He saw it eleven times in all. And by his final viewing, he had hit on the perfect way to pay tribute to the movie that had so moved him.

He would make a disco record.

After selling an initially sceptical Casablanca Records on the idea, Meco set to work recording a 15-minute suite of John Williams' themes disco-style, with a three-minute extract as a single. 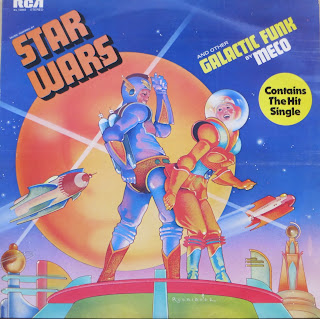 He went to the extraordinary lengths of hiring 75 musicians – not very far short of the number on the London Symphony Orchestra sessions. The result was an LP, Star Wars and Other Galactic Funk, and a single, 'Star Wars Theme/Cantina Band', which became a number one hit in the US and much of the world.

The single didn't quite top the charts in Britain, but it made number seven in the days when that meant selling a serious number of records, and I owned it before I saw the film. In fact, I had no idea at first that Meco's version was not the music heard in the film. So when the main title march began, instead of thinking "Wow! This John Williams is single-handedly reviving the lush romantic music score in the tradition of Max Steiner and Erich Wolfgang Korngold", I was thinking "Hmm, this is different from the record."


I will freely admit to a bit of hypocrisy here, because I'm sure that if today, someone tinkered with any John Williams score – whether by re-arranging it into dance music or sampling it into a pop record – I would be the first to complain. And yet Meco's Star Wars music seems so bound up with the joyousness of being a child during the time of the film's release that I can't help liking it.


Williams' Star Wars music is brilliant and timeless. Meco's is as 70s as cheesecloth shirts and brown carpets, and therein lies its charm. It is the perfect reminder of life at the height of Star Wars Mania.

Hi Darren,
Yes I remember it well - and at the time, I think I actually did like it. I also think I heard it after the film but I can't be sure. The thing I liked most - apart from it making my young mind think about Star Wars - was the laser gun sounds.

Thanks John. Actually, although I have hardly dabbled in the "expanded universe", my kids love the Clone Wars series, and I've seen and liked one or two episodes. It seemed much more in keeping with the original, Flash Gordon-style conception of Star Wars than I might have imagined, and unashamed to rip off the plots of films like King Kong and The Seven Samurai/The Magnificent Seven. That struck me as very much like first generation Star Wars.

Yes, I haven't bothered with the Expanded Universe either Darren. My son used to come home from school going on about the Clone Wars, but I think hardly anyone in his class is now interested. It's nothing but football and Match Attax cards now!