Star Wars on the small screen: The Making of Star Wars TV documentary

When a film has already broken all box office records and has been packing out cinemas for more than three months, it isn’t in desperate need of a free hour-long advert on prime time television. But that’s just the boost Star Wars received on September 16 1977, when ABC aired The Making of Star Wars.

The show succeeded in sending many people back to see the film, and did its bit towards keeping the movie in cinemas until Christmas.

The Making of Star Wars, produced and directed by Robert Guenette, is not only a pretty good account of the movie’s production, but records very well what it was like to live in a world that had gone Star Wars crazy.


It opens with delighted crowds watching Artoo-Detoo, See-Threepio and Darth Vader leaving their footprints in the cement outside Grauman’s Chinese Theatre that August. Soon afterwards, the show cuts shots of factories turning out the Star Wars soundtrack album, Chewbacca masks and all manner of other merchandise, all set to Meco’s disco version of the Star Wars theme.

Threepio and Artoo are the hosts of the show, but it’s William Conrad who narrates quite an interesting account of the film’s gestation, the shooting in Tunisia and Elstree, and the creation of the special effects.

Early on, we meet the 33-year-old, skinny, check-shirted George Lucas, driving his car around and being interviewed at his home in Northern California. “I think one of the key factors in the success is that it’s a positive film, it has heroes and villains and that it is essentially a fun film to watch,” he says. “It’s been a long time since people have been able to go to the movies and see a straight-forward, wholesome, fun adventure.”

The behind-the-scenes footage was fascinating to a budding film geek like me in the 1970s. We see the attack of the Sandpeople, presented without music or editing and contrasted with the finished scene. There are shots of Chewbacca having hairspray applied, and of technicians rocking the Millennium Falcon’s cockpit to simulate space travel. There is a sequence consisting entirely of malfunctioning droids. And there is take eighteen of an apparently simple scene in which our heroes run down a Death Star corridor. On a more educational note, the show gives some explanation of how the miniature effects were done and how blue screen photography worked. 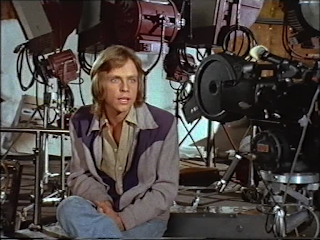 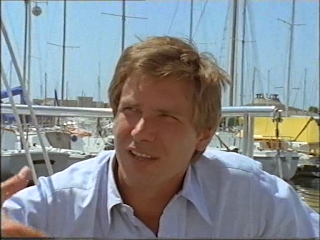 Then there are the interviews, which are irresistible viewing today. A very youthful Mark Hamill, sporting shoulder-length hair and a lavender and purple jacket, compares Luke with Dorothy in The Wizard of Oz or Jim Hawkins in Treasure Island. Harrison Ford, looking less actorly in an open-necked blue shirt, is interviewed on the deck of a yacht. Carrie Fisher, wearing a knotted checked shirt and interviewed in front of an early video arcade game, is already displaying a tendency to send up the proceedings , saying of the villain: “I don’t like Darth, and I don’t mind talking about it.”

Meanwhile, Alec Guinness, in a very brief clip, rubs his ear and tells the interviewer: “It’s no good trying to think of this character in terms of a psychologically rational man. There’s a bit of magic about it and I just trust the camera and backgrounds will provide the rest.”

The show is rounded off with some discussion of sequels, some of which makes disappointing listening for those who like to believe that George Lucas already had the whole story planned in his head. Producer Gary Kurtz says: “We’ve had a lot of speculation about the sequels to Star Wars and we are working on story material that will develop into potentially one or more pictures that will use the same characters. I like to consider them different adventures rather than direct sequels.” Carrie Fisher reveals that “I heard they were probably going to have an ice planet and a tropical planet like the Fourth Moon of Yavin.” Lucas himself says it is “anybody’s guess” whether Princess Leia is going to end up with Luke or Han, but that Luke is more devoted to her, while Mark Hamill warns: “She’s really a chump if she goes for Han Solo.”


Britain saw The Making of Star Wars on ITV on Friday June 16 1978. I remember very well the agony of waiting for the show to begin. The TV Times Hollywood correspondent Lesley Salisbury wrote that week: “You’re nobody in Hollywood unless you’ve seen Star Wars three times – and seen it every time from the 25th row of Grauman’s Chinese Theatre, where the stereophonic sound is at its most piercing. Once was enough for me: I found Darth Vader terrifying and the soundtrack deafening. But I found the Star Wars documentary, The Making of Star Wars, absolutely fascinating.”

I found it even more fascinating than she did – and thanks to a recording I made on our first audio cassette recorder, I enjoyed it, in sound only, countless times after that.
at 16:55

Brilliant post Darren [why do they have to be so short..?]
Anyway - yes. The 'Making of...' when it appeared on TV blew my young mind. The most exciting thing since seeing the film at the pictures.
I can well imagine you listening to that tape. The main reason I wanted a tape recorder was to record off the telly. Like SPACE 1999 for example. It killed me that I'd see it on Friday afternoon once - and maybe never again!
I had a few seconds of Star Wars on audio tape form the Academy awards or BAFTAS and listened the hell out of it.
"Don't worry - she'll hold together..."
"I'll take him myself!"
"Switch on - targeting computer..."
Etc etc.

We were tortured but it made it all the more thrilling!
John